So I’ve been a home owner for a little over two years now and I have attempted a few DIY projects and some things I have outsourced to those who are a little more skilled in those areas.  Now when we moved into our home EVERY SINGLE WALL WAS WHITE.  It didn’t bother me initially, I sort of looked at it as a blank canvas; at some point it became institutional like and something had to be done. So about a year and a half in I got motivated.

Along with many other women in our society I am a Pinterest connoisseur.  If you name it I have pinned it and can probably give you some pointers…though very few of those pins have I actually attempted.  So I began to look at different color schemes and painting techniques (link to board included below) and stumbled across a pin about painting your ceiling, which led me to search for painted ceilings.  BINGO!!!  This was it, simple, small scale, different.  I could handle this.

Now I am not the fru-fru-girly type but I like pretty things.  I had a pretty picture of an orchid hanging in my hallway and a cherry blossom wall sticker so I decided to take the pink and run with it.  Plus I knew there weren’t too many rooms in the house that my husband was going to be okay with me painting pink.  Okay on to the good stuff!!! 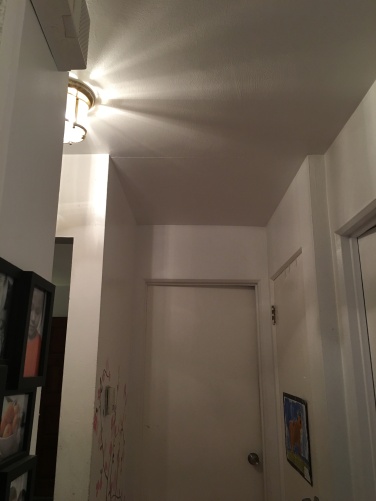 So as you can see it is a small space and there were already some consistent colors.  Please ignore the photo frame in the second picture that still has the demo pictures in it.  At least I got the frame up, that was half the battle.  I headed to my local hardware store and purchased all the trimmings!  I bought an extender, a roller, an edger, painters tape, something to paint in the corners, paint tray, paint; everything except a paint brush…which I didn’t realize until the kids went to bed and I got started.  I actually thought I wouldn’t need a paint brush because I had the roller buuuuuut turns out the roller was too big for the narrow spaces and I ended up having to use the thing intended for corners which led to a horribly drippy mess; but in the end I was VERY pleased with how it turned out.

After (rug came from Target)

So what do you think?!  Feel free to comment below.  If you have a painted ceiling please leave a picture.

One thought on “Pink Party”